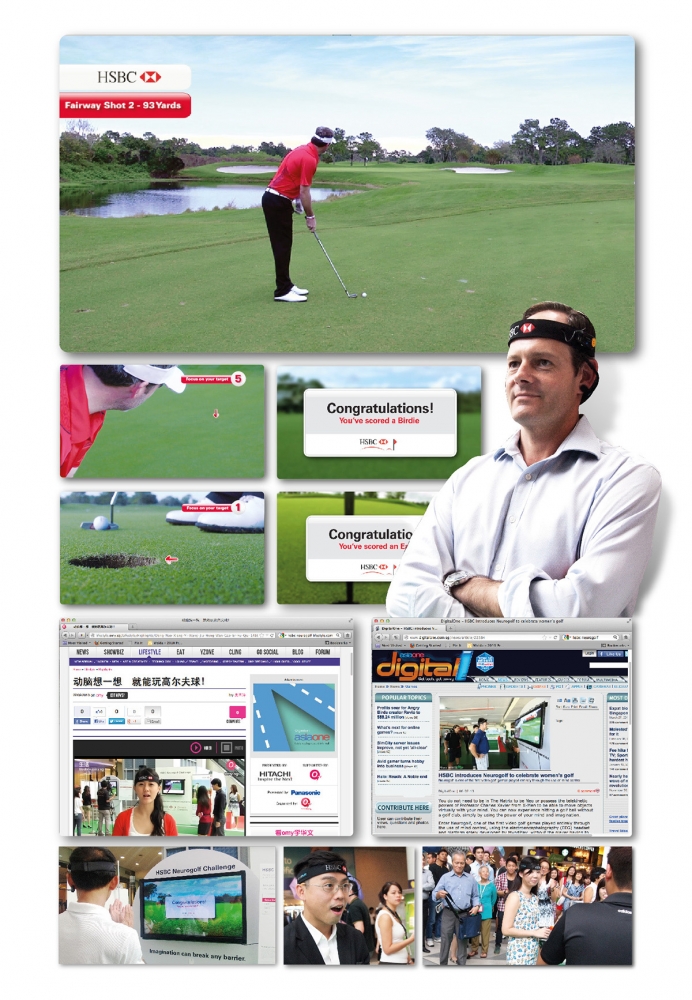 JWT’s HSBC Neurogolf campaign a cutting edge video golf game that makes use of an  an EEG headset and gaming platform that allows players to move a ball in the game entirely with their mind, without touching a golf club – or a mouse.  The game was presented as part of HSBC’s sponsorship activities at the HSBC Women’s Golf Championships in Singapore in March.   The game was designed to encourage players to visualize their goals before taking a swing, reflecting the theme of the  integrated campaign that JWT created for HSBC Women’s Golf, “Imagine Further”, which celebrates the power of imagination.  This innovation led over 44,000 Singaporean consumers to the HSBC Women’s Golf microsite, raising the profile of the bank’s sponsorhip, and on the ground events also resulted in thousands of leads for HSBC.

Won a Gold in ‘Best use of Technology’ for its innovative Neurogolf activation campaign for HSBC at the Marketing Events awards show in Singapore, and Gold at DMA Awards Singapore.

More our projects
Tanqueray Pursuit of Pleasure - Discover your... With hundreds of gin cocktails and each botanical blend so unique, the perfect elixir really is in the eye of the beholder,...
Discover Your South Africa In VR - Personalising... MyndPlay teamed up with BD Network to create a unique experience combining brainwaves and VR to personalise itineraries for...
X-Men Cerebro VR Mind Interactive Experience Step inside the Cerebro in our unqiue VR Cerebro Challenge where as you put on the Oculus Rift you are inside your own...
Discover Your South Africa - Personalised Brainwave... An amazing walkthrough experience which simulates the South African experience whilst the MyndBand measures the engagement...